Diabetes and the Eye

Diabetes prohibits the body from properly using and storing sugar, leaving excessive amounts of sugar in the bloodstream which can cause damage to blood vessels and various parts of the body- including the eyes and visual system. Diabetic retinopathy is when this condition results in progressive damage to the retina at the back of the eye. The retina is a light-sensitive tissue that is essential for vision, so if left untreated, diabetic retinopathy will eventually cause blindness. Sadly, despite the fact that proper monitoring and treatment can successfully halt the progression of the diabetic eye disease, it is still the leading cause of new cases of blindness in adults in North America. 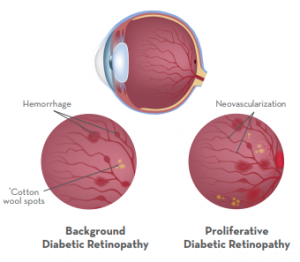 Many of the symptoms of diabetic retinopathy, particular in the early stages of vision loss, can be reversed with proper treatment and control of blood sugar levels. Diabetics with or without retinopathy must see an eye doctor at least once a year for a comprehensive eye exam to monitor any changes and ensure that proper treatment is prescribed.

Diabetic retinopathy involves swelling, leaking or abnormal growth of blood vessels in or near the retina. There are multiple stages to this disease, the earliest of which may not present any symptoms you can see.

Once symptoms of diabetic retinopathy do develop, they can include: dark or black spots in your visual field, or blurry vision, and it increases over time. This is a result of bleeding at the back of the eye, which prevents a clear image from being transmitted from the retina to the brain. 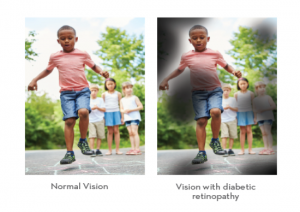 That’s why comprehensive eye exams are so important (yearly or annually) when thinking about diabetes and eyesight—both type 1 and type 2 diabetics are at risk for developing diabetic retinopathy, and the longer you have diabetes, the more likely you are to develop some form of the disease.

Treatments for diabetic retinopathy include anti-VegF injections, DHA supplements, replacement of the inner gel inside the eye (called a vitrectomy) and different kinds of laser surgery. A recent clinical trial also suggested that better control of blood sugar levels slows the onset and progression of the disease in many patients.

Diabetes increases the likelihood that common diabetes-related vision problems or diseases might occur:

·         Diabetics are prone to developing cataracts (a clouding of the eye’s lens) at an earlier age.

·         People with diabetes are almost 50% more likely to develop glaucoma, an eye disorder that damages the optic nerve often marked by an increase of internal eye pressure, which may lead to a permanent loss of peripheral vision.

·         Macular edema (and macular degeneration) are more common in diabetics due to malfunctioning blood vessels in the middle region of the retina responsible for central, sharp vision and functional vision, which again may increase a risk of permanent vision loss.

Some common symptoms of diabetic retinopathy include: 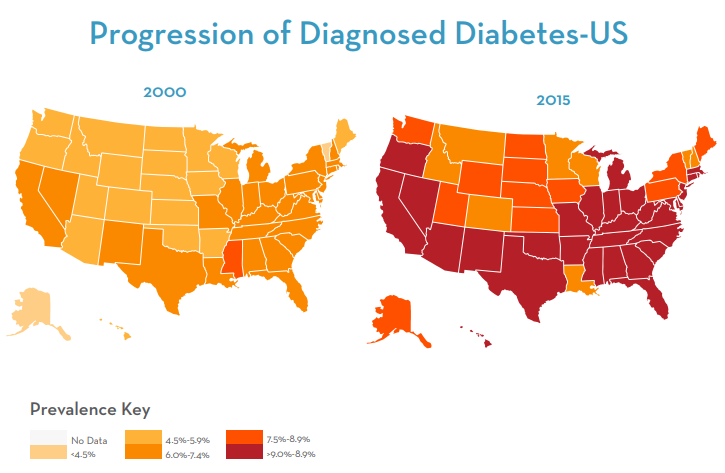 Over 21 million people in the United States have diabetes, with an estimated additional 6 million people unaware they have a form of the disease. What’s more, an estimated 54 million Americans ages 40 to 74 have prediabetes, a condition that puts them at risk for developing type 2 diabetes. According to a recent American Optometric Association survey, diabetes is the leading cause of new cases of blindness among adults ages 20 to 74.

Diabetes is the number one cause of blindness in the working age population. Until now, there was nothing we could do to reduce the chances of developing diabetic retinopathy except manage the blood glucose levels carefully.  Now clinical studies have proven that a specific formulation of re-esterified triglyceride DHA ( a type of Omega 3 fatty acid) can delay the onset and slow the progression of Diabetic Retinopathy. In fact, the studies show nearly a 50% reduction in the progression of diabetic retinopathy!

This is not the same type of Omega 3’s that can be purchased at a drugstore or even the same type that we currently use for dry eye disease.   It is only available with a product called nūretin. It involves taking 2 capsules a day and the cost is $35 a box (which is a one month supply).  Your prescription drug plan won't pay for this as it is a supplement and not classified as a drug (even though it needs a doctor’s recommendation to be purchased).

Please consider adding this supplement to your health care routine. We strongly believe a nearly 50% reduction in the number one cause of blindness is well worth it!

Pay My Bill
Call 856-235-2620
Schedule an Appointment
Order Contact Lenses
Review Us On Google
New Patient Form
Save time by completing the form before you come in!
Order PRN Nutriceuticals Online

Open 2 Saturdays a month.  Please call for an an appointment.